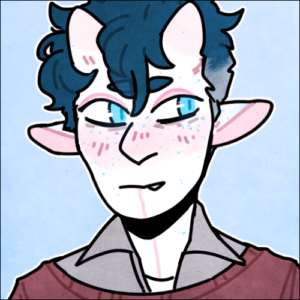 He’s. Proud. Sort of. Also full of shame and needs validation and approval. Easily riled up or embarrassed, although he tries not to be.

He sort of ruined his life multiple times over, so…he, is sad.  Honestly right now he’s not doing too hot and has emotionally given up. He’s

Bogdan was the tiefling child of a politically-important family, who was given up before anyone found out as to not tarnish their reputation by having made a deal with a demon.  He grew up in an orphanage and struggled a lot with feeling loved/wanted, and he was never really able to grow past that.
When he was 14-16, after leaving the orphanage to attempt to prove himself, he struggled with learning magic. Eventually he found some books on warlocks and demon pacts, and tried to summon a lower-level demon to grant him magic (planning to become so powerful that he could defeat the demon later on and just have his own magic). Instead, One of the Sins, Pride, showed up. And Bogdan, being a stupid child, agreed to give Pride his soul in exchange for warlock magic. After all, the idea of a soul seemed stupid and fake, so again, he thought he was going to pull one over on this idiot demon.

He was eventually invited to a Heroes School, and ultimately, failed out of it. There are a lot of events in between there, but. Bogdan found out his birth parents are kind of Bad People (which should have been apparent by the fact that they made a deal with a demon and then proceeded to give up their kid to not make themselves look bad). He got super manipulated by Pride (again, something that he should have seen coming because Pride has tried several times in recent history to like, start the apocalypse and take over the world. But again, idiot. ) fell hard in love with him and sort of married him, giving up his soul and now his body and Pride did what he wanted with it.

The campaign defeated the demons and stopped them from taking over/ending the world (a lot happened) and Bogdan, now a…war criminal, because you know, he was working with/was a demon, was pronounced Dead and he went under the alias of Rowan. We like, Killed Pride right here. This is important, because he’s dead, right?? So that’s good right?????

For a decent few years!! He tried to get back on the track of being a Good Boy. He didn’t have any magic, and trained just with sword and went around trying to…help people and do low-level hero stuff (he started back at level 1, he lost all his everything). Bogdan hung around Spades, a (ex?)prince vampire, and twin to a girl Bogdan had a crush on, who was also an outcast of his country due to Dealings with Pride. Remember how Bogdan has some bad feelings about feeling loved and wanted. Well, you guessed it, he gets crushes and falls in love pretty easily, so obviously he started to have a crush on Spades

then CARMEN comes around, who dated Spades at some point, and is jealous and starts to date Spades again in a Total Dick Move (i love them).
Bogdan, who at this point has had some bad dreams because Bishop, when he was going through hell (literally) accidentally brings Pride back because none of my characters aren’t stupid.  Remember how Pride was dead like a paragraph ago? Well.

Anyway Bogdan goes crawling back to Pride, summons him again, and does some bad magic shit to get Pride a Real Body. Later they sort of adopt North, a kid who’s family died because of when Pride was using Bogdan’s body to cause havoc before.

He’s had a rough time and he’s a stupid idiot who wants to be loved but also wants power and recognition that he’s powerful.