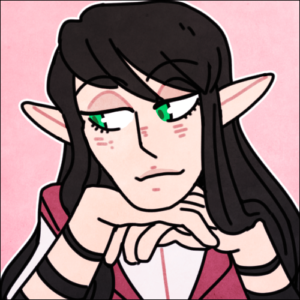 Areli is prissy, sarcastic, and demanding. He cares a lot about his appearance, social status, and just in general what people think of him. In group settings he can be kind of…obnoxious, because he wants to be the center of attention, gossip, and flirt.

Get Areli talking about art, and he’ll talk for a While. He has a lot of opinions on art, and just…really likes it. True art kid.  Since he’s an elf, he spend a lot of time learning about art, and every while he’ll just become interested in some other form of art and try to master it, or at least learn enough to be satisfied with his abilities.

If it’s not about art or appearance, Areli can come off as kind of lazy. He avoids doing any physical work, partly because he has no strength, but, mostly because he doesn’t want to do it. He would much rather a big strong man come and help him out 😉

One-on-one, he’s a little toned down(though still wants to be the center of attention, gossip, and flirt), and a little more genuine. While he does show off a lot of confidence, Areli can be insecure when it comes to knowing what people actually think of him.

Areli grew up in a modest household, with his mother Abigail, a basket maker, and his dad Adrian, a map maker. He grew up with a fairly average life — went to school, ended up getting really into art there, and just went from there. His father was in and out of their life a lot, traveling. He made trade routes and sometimes got hired out by adventurers — so when he would come home, he would bring gifts and fantastical stories about what adventures he went on. Areli got very enamored with that

Areli Aurum is actually Areli Blackwood — He changed his last name just to sound more fancy, since the Aurum family is a good, respected name, and he wanted to show off. His name really just means Gold Gold.