Stats:
Stats in-game, last we played. In-world, they are probably…better.

A’bel is a little self-important and blunt. They are a hard worker and tend to overwork themselves trying to reach self-imposed goals. They’re somewhat quiet, and often don’t engage in social situations unless they feel they have a point to prove, or someone to impress.
They aren’t the best at making friends — A’bel has trouble with empathy and reading other people’s moods. It’s difficult for them, and learned more to seclude themselves and avoid teamwork when possible.

A’bel is easily made jealous, and often stews in their own self-made feelings of inadequacy — though, this does tend to spur them into action, trying to better themselves and prove their own skills and talent. Most of that stems from growing up with a twin sister, Abella, who always seemed a little ahead of A’bel. She’s a little smarter, stronger, and more personable, and A’bel tends to look at themselves in relation to Abella.

A’bell DOES start to grow out of this once they are forced into situations to develop close personal friendships, but still doesn’t often seek them out themselves.

A’bel grew up with an aristocratic family, and was pretty well off. They spent much of their childhood in school, or training to be a hunter with their parents, grandparents, or twin sister. A’bel honestly had a very good upbringing, with a strong and loving family who, really, let them follow what they wanted to do more often than not and never truly tried to force them into anything they didn’t want to.

A’bel spent most of their time reading books when they could — stories about dragons and the great heroes that fought and defeated them. They became enamored with the idea of dragons! Big, powerful creatures that were sought after to fight due to their strength!!  They wanted to find one, to tame one, figuring if great heroes were great because they were strong enough to defeat these creatures, then if you could command a dragon you would then be twice as strong?

Well into their late teens, A’bel struggled making friends. Abella would often drag them along to hang out with her friends, to get A’bel to try to open up and get them out of the house, but they were never really A’bel’s friends. They continued to spend a lot of their time out in the woods, learning to be a ranger, and by themselves.

A’bel watched their sister go on their rite of passage journey, becoming one of the very, very few drow to bring home a dragon skull as their trophy. It made A’bel uneasy to go on their own passage, and delayed it as long as they could — while it was several years, it wasn’t so bad because they’re an elf, and have plenty of time ahead of them. If A’bel wanted to wait, they were able to wait.
But it came down to feeling inadequate — their sister was advancing and doing her own thing, while A’bel still hadn’t fully become an ‘adult.’ They set off to do their own thing at that point, leaving with their family’s expectation that they would come back with a big monster that they defeat.

Instead, their plan was to…find a dragon, and learn to tame it. Still, not really conventional thinking for any drow.

[Campaign start] A’bel ends up finding dragon eggs with a small group of adventurers, and raises their very own dragon, Ida. A’bel becomes a dragon rider, and eventually an ambassador between the mapped, known world, and the places past that.

Mother. Big bear hunter like lady who really values strength and hard work!! She still goes out hunting, and helps train younger drow — she did a lot of training with A’bel and Abella, too. The family took her name, not her husbands.  She’s very kind and means well! A good hearty laugh, and expects people to try their best and work hard.

Father. Much smaller in stature compared to his wife. Not particularly magically inclined, but knows more than most drow when it comes to it. He’s an okay hunter, and relies more on sneak than strength, unlike his wife.

The two of them have a sort of Izumi and Sig relationship[Full Metal Alchemist]. He’s quieter and she’s showy.

Twin Sister. She trained with A’bel when younger, the two of them are really good friends! She’s a lot more outgoing and personable than A’bel. She focused a lot more on physical training, and is very strong willed.

She’s excitable and energetic, pretty Devil-may-care, act first and figure out how to fix things later. She’s seems naturally lucky — she works hard to get where she is, for sure, but things seem to work out well for her  in most situations even when it seems like they shouldn’t — Like with the Dragon.
As she got older, Abella found herself as the Queen’s apprentice, and has mellowed out a little bit with her position. She’s hardworking, and cares very much about her people and willing to step up and put herself aside to do what she thinks is best to help people!

A’bel’s dragon!! A big, kind of dumb, lazy cat, basically. He loves her a lot and trusts her the most. Ida is by A’bel’s side most of the time, and A’bel considers her family.

A’bel looks up to Andrew a whole hell of a lot, and looks to him as a sort of mentor figure.

A’bel had a short…fling? If you can call it that, with Lenya. Meeting him and learning from him help change A’bel’s world view, and while A’bel doesn’t agree with Lenya on a fair share of things, he has a lot of respect for him and values him as a friend!! I wouldn’t say they’re Very close, but A’bel would still def visit Lenya now and again.

MY ART
FANART
MY ART 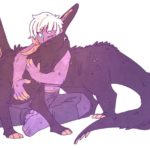 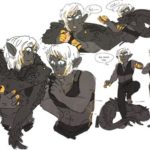 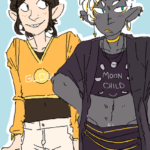 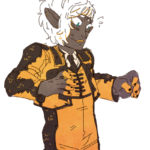 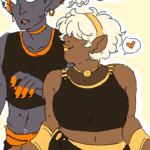 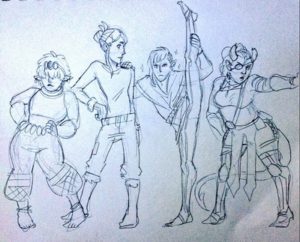 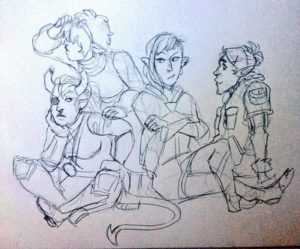 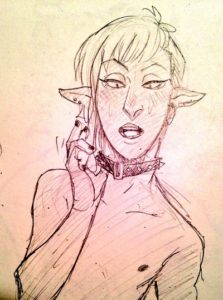